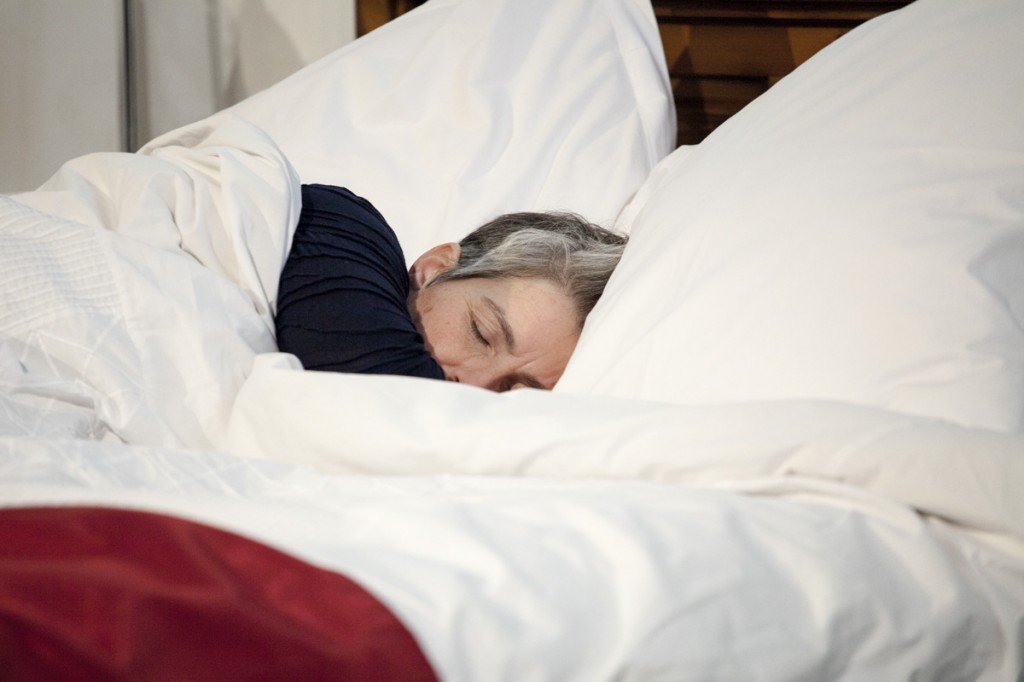 Originating with a performance as part of SPILL Festival of Performance in November 2012, Bedding Out emerges from the current welfare benefits overhaul, which threatens many with poverty and a propagandist campaign that has seen a doubling in disability hate crime.

The project sees artist-activist Liz Crow taking her private bed-oriented life and placing it in the public arena for all to see over a 48-hour period in order to show that what many see as contradiction, or fraud, is simply the complexity of  real life. Bedding Out has  gone on to tour as part of the People Like You exhibition at Salisbury Arts Centre in April 2013, coinciding with the introduction of the Personal Independence Payment, which replaced Disability Living Allowance on 8 April 2013.

Members of the public are invited to participate in ‘Bedside Conversations’, gathering around the bed to talk about the work, its backdrop and its politics, while those unable to attend in person are invited to take part virtually, through social media. The Salisbury performance was watched on livestream by more than 9,750 people in over 50 countries and received national coverage in The Guardian newspaper. In August 2013, Bedding Out travelled to Edinburgh where it was performed as part of The Fringe.

Bedding Out was  commissioned as part of Disability Arts Online’s Diverse Perspectives project (www.disabilityartsonline.org.uk), which  commissioned eight disabled artists across the UK to make a new artwork that would spark conversations and debate about the Creative Case for Diversity.

These Twitter Conversations contain a selection of the many thousands of #beddingout tweets generated from the run up to the Salisbury and Edinburgh performances to their aftermath.

Tweets have been edited for ease of reading and reordered by theme. A few additional comments have been included from Facebook and The Guardian article about Bedding Out. Some conversations run over several tweets and have been edited into paragraphs.

All URLs were checked in September 2013.

Liz Crow would like to thank Judith Stewart and Emma Sheppard for help with editing and especially ‘tweetmeisters’ Dawn Willis and Laura, without whom there wouldn’t have been a twitter feed at all!

A subsequent book chapter by Lucy Burke and Liz Crow considers the way that Bedding Out placed new social media at the centre of its exploration of changes to the benefits system and the human consequences of austerity, potentially transforming the ways in which we conceive of arts based political activism, the politics and ethics of artistic practice and the capacity of both to effect change in the world.

RGP can’t advise on benefits applications and appeals – this is not our specialist area – but these groups can.

Benefits and Work
Subscription service (£19.45/year) for detailed and up-to-date guides on how to make effective claims and appeals.

Turn to Me
Online mental health support community, where you can remain anonymous. Valuable resource in times of real crisis and whilst feeling suicidal thoughts.

WOW Petition!
Your signature is needed to call for a cumulative impact assessment of welfare reform, and a new deal for sick & disabled people based on their needs, abilities and ambitions

Where’s the Benefit?
Campaigning against the government’s distressing war on disabled benefit claimants

Contact your MP
Identify your MP and write to them free.

They Work for You
Find out what your MP, MSP or MLA is doing in your name, read debates, written answers, see what’s coming up in Parliament, and sign up for email alerts.

Jolly, D (2012) A Tale of Two Models: Disabled people vs Unum, Atos, Government and Disability Charities
Explains the biopsychosocial model that underpins changes to disability benefits, which claims that we can think ourselves out of being disabled and disqualifies large numbers from qualifying for the support they are entitled to.

Wintour, P (2013) The Day Britain Changes: welfare reforms and coalition cuts take effect, The Guardian, 1 April
A summary of the changes being introduced from 1 April 2013.

Compass (2013) Social Security for All: the renewal of the welfare stage (briefing)
Report from a summit of groups, organisations, chariiites and individuals seeking to defend a comprehensive social security system in response to a speech by David Cameron in summer 2012 which signalled the end of the welfare state if the Tories win a majority at the next election.

Broach, S & Whittaker, K (2012) Using the Law to Fight Cuts to Disabled People’s Services
Summarises the key legal rights for disabled people and those supporting them, and looks at some of the general duties which may prevent services being cut or withdrawn.

Disability News Service
The UK’s only news agency specialising in disability issues, with a weekly news roundup on a range of issues including benefits.

NHS Whistle Blower
Former Regional Director of the Department of Health explains changes in the NHS and why he resigned his post in protest. Search on ‘Gabriel Scally’.

Quarmby, K (2012) Leveson is showing ‘wilful blindness’ towards disabled people, The Guardian, May
Shows the connection between the fraudster rhetoric and hate crime.

The Ten Stages of Genocide
Genocide is a process that develops in ten stages that are predictable but not inexorable. At each stage, preventive measures can stop it.

The Three Rs: Rights, Resistance and Reclamation
An interactive presentation and debate with Debbie Jolly and Robert Williams-Findlay, co-founders of Diabled People Against Cuts, evaluating the changing nature of contemporary disability politics since the UK Coalition came to power.