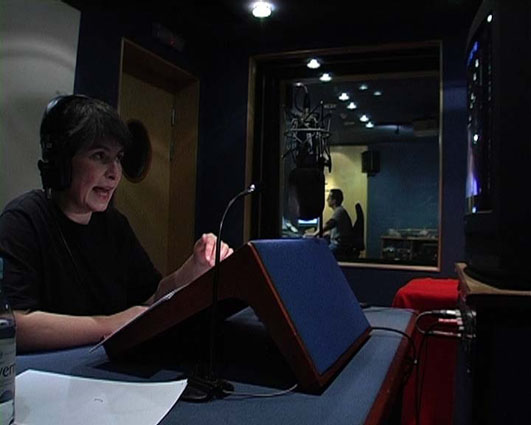 Audio description, captioning and sign language (ACS) are increasingly used to make films accessible to audiences. However, current approaches often make a disappointing experience for both audience and filmmaker, with access produced as a neutral describer or an after-thought and rarely as a creative contribution.

We are pioneering new approaches to film accessibility, making ACS an integral part of the production process rather than an access ‘add-on’.

Audio description is an audio narration of visual elements for audiences with a visual impairment. Captioning transcribes/annotates and sign language interpretation interprets audio information for Deaf and hearing impaired audiences.

First ever public screening in India of an audio described film, 2007

The Limitations of Now

Film exists across genre, encompasses every subject, style and emotion. Yet, when it comes to access, there is still a one-size-fits-all approach. Sign language interpreters and captions are usually located in boxes to the right and base of the screen, whilst the main picture is shrunk and pushed aside to accommodate them. Audio description frequently seems just as removed from the overall feel of the production.

For Liz Crow, it was the experience of making Frida Kahlo’s Corset that made some of the limitations clear. The audio description was produced at the point of distribution by an outside agency and simply didn’t represent the film. “The priority of the audio description was to get across the narrative,” she says, “to describe but not interpret. In a film where every shot is composed and framed to convey meaning, description alone leaves the audience without crucial information. The very first shot, a close up of Kahlo’s eyes darting left and right is very distinctive and, in context, it builds a crucial sense of unease. To listen to the audio description, the character could just as well have been watching a tennis match.”

For the audience, the result is that the very methods designed to promote access can detract from the qualitative experience of the production. For the filmmaker, the access conventions available can misrepresent and undermine the vision they have worked so hard to create and communicate.

In response, Roaring Girl Productions is using our own productions to trial imaginative and innovative approaches.

On Nectar, we worked closely with Films at 59 to bring ACS into the core of the creative and production process.

On Illumination, we experimented with the caption design, building captions into the action of the story.

On Resistance on tour, we worked closely with Art AV to programme ACS into the system so that the installation can play versions appropriate to different audiences.

We have documented this work in order to: