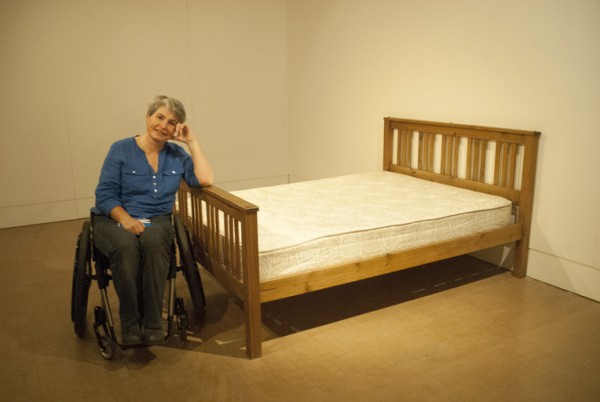 In my recent interview about Bedding Outfor BBC Ouch!* , I was asked “So is this a sort of John and Yoko for PIP [Personal Independence Payment] or more a sort of Tracey Emin-related activity?”

When I began to dream up Bedding Out, I kept bumping into John and Yoko and Tracey and began to wonder how many other have made art based on the bed. Quite a few, it turns out, though not many actually inhabit their beds or convey a sense of their bed as occupied.

This week, though, actor Tilda Swinton has hit the headlines, sleeping in a glass box in New York’s Metropolitan Museum of Modern Art, in a reprise of her 1995 performance The Maybe. You only have to read the comments sections in the press to know that this is the marmite of the art world, and whilst I can’t abide marmite, I find something deeply tender in this sleeping form made public, this voluntary act of vulnerability. Asleep in the gallery for several six-and-a-half-hour stints*  over the year, the audience can linger as long as they choose in the privilege of the gaze.

Even as the act of sleeping is so familiar, perhaps because we all know it so well, or maybe because we are never conscious in the experience of it, The Maybe can touch profoundly. How often are we invited into such close proximity to a stranger captured in the act of sleeping, to be able to look in our own time, to respond and contemplate?

In The Maybe, Tilda Swinton makes public the familiar, private intimacy of sleep. Both of our performances are the private made public, but for very different reasons. In Bedding Out, I shift focus beyond the figure in the bed and onto the bed-life, making public its careful concealment. For me, it is a revealing of that side of my self that wins neither friends nor accolades, and which I learned so early to keep so carefully out of the public gaze.

When I performed last autumn’s version of Bedding Out, I found that the more people were willing to slow their pace to mine, the more took from the work. When people refer to the bed, they invariably speak of being born, of sleeping and dreaming, of the disruption of short-term illness, of having sex, giving birth, of dying. They speak of being in bed in terms of occasion and event, but rarely do they speak of the sustained bed-life as integral to life. The bed-life that I convey is beyond the experience of most; it requires time and stillness to imagine.

In Tracey Emin’s installation My Bed, chaos and crisis lie tangled in the sheets showing the aftermath of the artist’s nervous breakdown. The artist is as present in that empty bed as if she were there in the gallery. In contrast, even as I occupy my bed throughout the 48 hours of performance, I am scarcely there. In the thrashing of bed sheets and the detritus of empty booze bottles, fag ends, stained sheets and worn underwear, Tracey’s bed is all activity, whilst mine is a process of silence and of making myself absent from activity and interaction. Where Tracey’s bed is often seen as confession, mine is a reveal of life hidden from view.

“But what will you do for all those hours in the bed?” I am repeatedly asked, as though to do nothing is unthinkable. For me, the bed is that still, quiet place where I piece myself together again. For the hours of performance, mostly I will zone out, sleep, keep silence, try to disconnect even from myself. The more I can disengage,, the more this bed-life serves its function in making me well-er and connecting me back in to the peopled world. So I will observe the opposite of the public me that works so hard to appear energetic and busy and doing.

Ron Muerk’s sculpture In Bed is typically approached with a sense of awe, as audiences gaze at his three-times life-sized figure in her bed. Where the ordinariness of the human body is made strange through sheer scale, I see mine more as a peeling away of mystery. Like Tracey’s bed, I’m portraying life as I know it, as messy fact not neat and comfortable fable. Life has loose ends and complexity and I like the honesty of making them visible.

I feel close in spirit to Ron’s In Bed, mirroring the sculpted woman’s deep contemplation. Just as, within my bed, I turn my own gaze inwards, we cannot know another’s inner existence. Neither can we know their internal living of, and with, impairment, most of all when it cannot be seen. Some things cannot be measured from the outside. If it cannot be seen, then it can only be known through my account of it. To have a possibility of knowing, you must trust me in my telling of my self, my needs, the messy complication of my life. Just as every time I venture out, it is by a leap of faith in those around me, it is a faith that needs returning.

In a photograph of a lone audience member alongside that outsized bed, the focus of the work shifts to the onlooker. It is in relation to people that the figure in the bed gains her impact. In bringing audiences to my bedside conversations about the work, its backdrop and its politics, in connecting to them through social media, I hope for that same shift, where the onlooker becomes an anchor for Bedding Out in the wider world.

Of the four historical pieces of art based on the bed, and the oldest of the four, John & Yoko’sBed-In is the most immediately recalled, the most often emulated, and the most overtly outwards-looking. Theirs was a bed-in for peace, whilst I am bedding out for justice; it is the other side of the same coin.

Theirs was a riotously active week of activism – wide awake, making phone calls, giving newspaper and broadcast interviews, making banners, bicycle on the bed, making music. WithBedding Out, I am looking to another kind of activism, exploring whether it can be done from a place of stillness.

In the face of a benefits onslaught which threatens many with poverty and disenfranchisement and with a propagandist campaign that has doubled disability hate crime, urgency seems to call for loud and direct action. Yet as we confront a system that requires us to parade our hidden, most carefully concealed selves to justify the state’s support, I wonder whether it is possible to thread another, contrasting colour into the weave of activism.

* I’d call six-and-a-half-hours amateur next to my 48, except that I get to take loo breaks.