Home » Blog » Reminding myself why 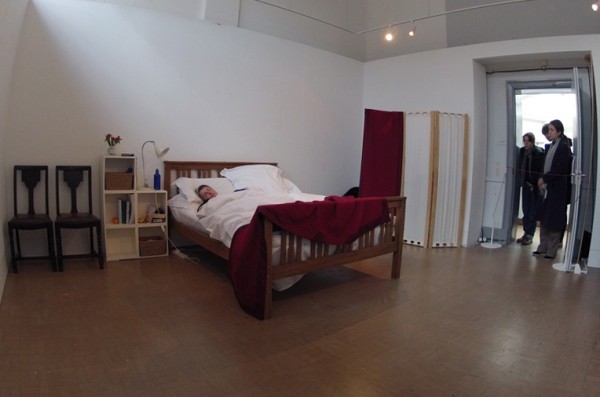 On the eve of Bedding Out, there’s mounting excitement in the twittersphere and my stomach is looping the loop. Will the work do something? (Will my body do what’s needed?) Will people join in and make the project work?

I am back at the eve of my Fourth Plinth performance in Trafalgar Square. Then, it was the uncertainty of performance that proved its power. Then, it created a starting point, a moment, where the onlooker was confronted with questions and a place where other campaigners and activists could gather anduse the opening it provided.

I remember then, as anxiety created its own momentum, stopping it from running out of control depended on my returning to the why: the absolute essence of what I am doing. It was there that clarity lay, and the guts to see it through.

So here’s is the why of Bedding Out:

So that’s why. In Bedding Out, I am portraying a human story in its broader political context. It’s about combining with all the other voices to create a very different story of what it is to be us and to feed into the debate about what kind of society we want to be.

In the words of John Lennon, adapted, let’s start a revolution from my bed.

Join me.
Bedding Out:
10-12 April, starts 2.00pm
At Salisbury Arts Centre and on the World Wide Web

On Twitter:
Follow @RGPLizCrow and use the #beddingout hashtag to take part throughout the 48 hours. Join our Twitter-based Bedside Conversation on Thu 11 Apr at noon.

By text:
Anyone not on Twitter can text us: 07784 899514 and we can upload what they say to Twitter. Typing ‘MySecret’ before the message ensures that their message will be tweeted anonymously.

Bedside Conversations:
Members of the public gather round the bed to talk about the work, it’s background and its politics.
Free entry. Duration 40 minutes. Book at Salisbury Arts Centre website: uk.patronbase.com/_SAC/Productions or phone: 01722 321744
Or watch online at www.roaring-girl.com (with BSL interpretation and live subtitles)